Get in touch Request an estimate
No products found
Search 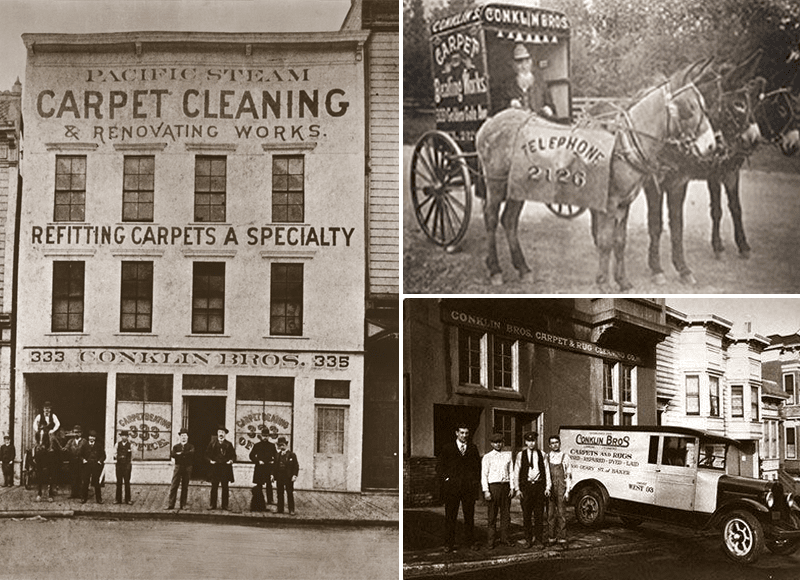 In 1880, brothers Frank and Joe Conklin opened “The Pacific Steam Carpet Cleaning and Renovating Works” on Golden Gate Avenue in San Francisco. Carpet cleaning and renovation were conducted in the company plant; carpet was picked up and delivered by wagon, pulled by a pair of mules. When the Conklin brothers retired, Joseph Emmons and his son Jack took over the business and grew it into a retail floor covering chain, keeping the Conklin Bros. name.

In 1963, Richard Oderio bought the Conklin Bros. franchise in San Jose. He spent the next 25 years working industriously on both his business and his philanthropic pursuits in the community. Richard retired in 1989, at which time his son Rick took the helm as President. Today Rick is still hard at work carrying on the family business.

These days the market is flooded with copious amounts of inexpensive, second-rate carpet and flooring. It’s everywhere. Though the prices are enticing, the quality will not endure the rigorous demands of daily life. That’s why at Conklin Bros. we only sell first quality name brands from the best manufacturers. No matter what your budget, you can be confident you are buying a superior product that will be both beautiful and durable for years to come. However, we want you to be thrilled with not only your flooring decision, but your entire Conklin Bros. experience: our showrooms, our products, our sales consultants and our installers. In fact, we want you to be so pleased with us you’ll recommend us to your friends. Count on Conklin Bros for award-winning customer service, the widest selection of flooring options and getting the job done right with craftsmanship and care.

Call or come in today!

Meet with one of our skilled project specialists to get started